We didn’t have cable TV while I was growing up. That was a luxury to be enjoyed at our grandparents’ house (and I definitely didn’t feel deprived by this). In my young adulthood, I would splurge for cable on and off during various promotions, but would always end up ditching it because I couldn’t justify the cost. I was rarely home and was busy anyway, so it was a complete waste. When Netflix came along, I especially felt this way. With Hulu, YouTube and Redbox, cable was totally obsolete in my book. Then I had a baby. That’s when I got hooked.

I don’t want to fuel the stereotype that stay-at-home moms sit on our butts, stuffing our faces, and watching TV all day, but in the first year of my son’s life, I spent a lot of time glued to the recliner, rocking my baby, and turning to the tube as an escape.

My husband is a serious fan of cable TV and movies, and since he’s been working in the TV industry for more than a decade, it makes sense. He was more than happy to take advantage of the bundle services available to us. (Because when you add cable, On Demand, DVR, and multi-room service, the price you pay for internet goes down and the whole thing seems to make financial sense. Seems to. . . )

My son has always been a problem sleeper, and during that first tumultuous year, he would only nap while being held and rocked. When I wasn’t in the recliner, I was attached to a breast pump so, I started to allow myself TV as an indulgence. That’s also when I upped my social media game, as I never had a smart phone until I had a baby, either, but that’s another blog post. Watching whatever show I wanted, when I was forced to sit patiently anyway, became an addiction. It’s not that I started neglecting other things in favor of TV; it’s that I could no longer see a world where I would be forced to choose from whatever garbage programming was on during nap time.

On Demand was a gateway drug to really crappy reality TV. I have never watched Keeping Up with the Kardashians and generally can’t get down with Bravo, but HGTV led to MTV and then to obscure channels somehow. I found myself watching Après Ski and Slednecks. . . all because I missed the mountains while I was stuck in the 90-degree, year-round heat of Florida at the time. I watched a few episodes of Shahs of Sunset and RuPaul’s Drag Race because I missed art, makeup and anything remotely glamorous in my life. Some of the shows just left me depressed. Does anyone else feel ancient while watching The Real World?

As my son got older and I started working from home, watching TV became less of a pastime and I had to choose my shows my wisely. I would gladly give up reality TV for Game of Thrones any day! Now that he’s two and my business has picked up, the only person watching an insane variety of programming is the very person who is supposed to have the most limited screen time of all of us! Even my husband, lover of all-things-TV, admits we don’t have time to enjoy the services we have. The catch is that the cable provider (or dealer, if you will) really knows how to keep us hooked: if we get rid of all but our internet service, our monthly bill will be almost as much as it is now, not to mention the cancellation fee we’ll be hit with.

A part of me wouldn’t mind paying more for Internet in exchange for getting temptation out of our home. I want to be forced to be more creative, to work more, to read more, to listen to music more often in lieu of watching television. I’m a modern mom who needs all the help she can get in making sure her kid doesn’t watch too much TV. I honestly don’t want my son to rely on television or use it as a crutch in any way. And, hello, whose love life couldn’t benefit from less TV watching?! Tell me you haven’t had the Netflix or chill discussion with your too tired spouse at 10:00 p.m.

I’m not interested in going off the grid and you won’t catch me on an episode of Tiny House Nation, but I have been making a conscious effort to live with less clutter (physically and in the cyber world) and fewer extravagances that we often take for granted. So I do feel guilty spending anything on cable these days, but then I rationalize it in some way and it sticks around . . . and will continue to stick around at least until our contract is up. Until then, I raise a glass of Riesling to latest episode of Detroiters because I would be doing our city a disservice if I didn’t tune in.

How have your TV watching habits changed since becoming a parent? Do you find you watch more of it or less? 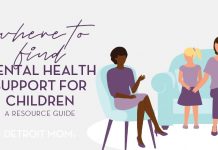 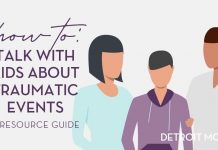 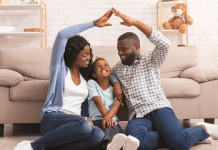