We all have a show that we can watch over and over. If my newsfeed is any indication, favorites like The Office, Friends, and Modern Family fall into this category. These are the shows that will live on in syndication until our generation’s version of TV Land is broadcasting.

For me, The Golden Girls is this show. It’s iconic. I played Golden Girls Clue (yes, there is a board game) at my bachelorette party. I own all of the seasons, including the ill-advised Golden Palace, on DVD. Not Blu-ray– DVD…proof that my love of The Golden Girls predates the recent renaissance, which landed it all over basic cable. The Golden Girls are the jam. 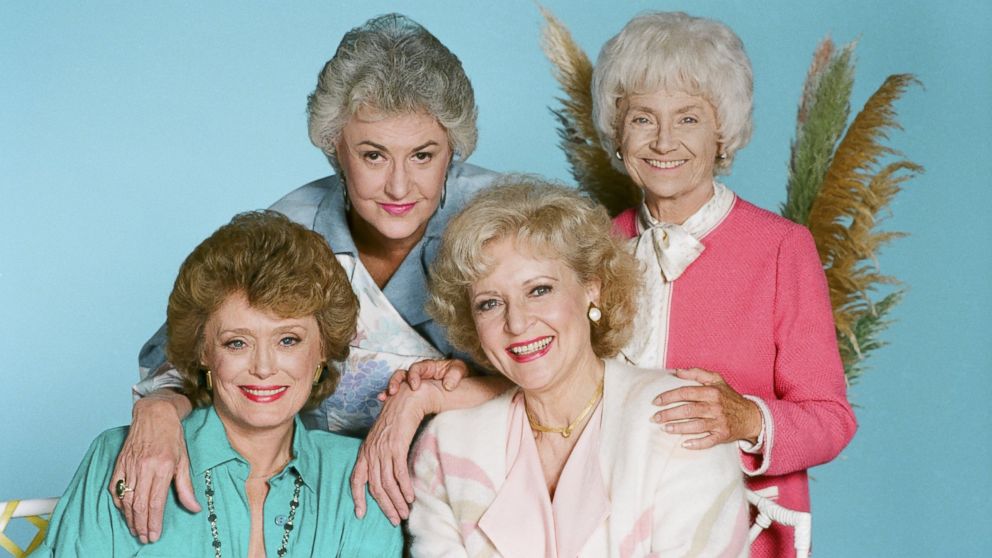 Before shows like Sex and the City and Desperate Housewives, there was The Golden Girls. A cast of mature women. Funny women. Critically-acclaimed women. Award-winning women. They are the only all-female cast of actors to have each won Lead Actress Emmy awards. These women are so iconic that they have been honored among the likes of Julie Andrews (Mary Freaking Poppins!) and SIR Elton John as Disney Legends. Talk about some major girl power.

Not only was the cast of Bea Arthur, Betty White, Rue McClanahan, and Estelle Getty fantastic, the women they portrayed on the show were cutting edge. Blanche, unabashed in her sexuality; Dorothy, smart as a whip and fashion sense that didn’t stop; Sophia, a sense of humor that cut like a knife; and Rose, loving and loyal and kind to a fault. They were women who supported each other no matter what. They were strong and fearless, surviving stroke, divorce, St. Olaf stories, death, heartbreak, jailbreaking pen pals, and Stanley’s toupee. Women who would stare down the business end of a cheesecake without flinching. These are women we should aspire to be.

Ahead of Its Time

The Golden Girls was ahead of its time. Many of the plot lines could be lifted to shows like This is Us, Blackish, or pretty much anything on Freeform and would still be relevant. Over 30 years ago, it took on same-sex marriage, AIDS, coming out, teen pregnancy, assisted suicide, and did these topics justice. If this show was produced in today’s language and culture, Dorothy’s brother Phil wouldn’t have been described as a “cross dresser”; he would have been a trans icon.

There is a Valentine’s Day episode that stands out to me because it starts with the ladies in the supermarket preparing for a romantic weekend away with their boyfriends. Picture it: Miami 1989. They try to buy condoms on the DL, but the hapless shopkeeper needs a price check, which he announces on the loudspeaker. While this episode is probably best known for Dorothy shouting at Rose, “Condoms, Rose. Condoms. Condoms. Condoms,” that is not what stands out to me.

The entire setup could have been relegated to only a comedic moment, but not on this show. Instead of being mortified, Blanche grabs the microphone and makes an impassioned speech where she declares that she and her friends will not be judged for partaking in consensual and safe-sexual relations with their significant others. In the episode, this monologue ends with raucous applause from the studio audience. Watching it from the comfort and anonymity of my couch, I am inspired by her boldness and bravery. 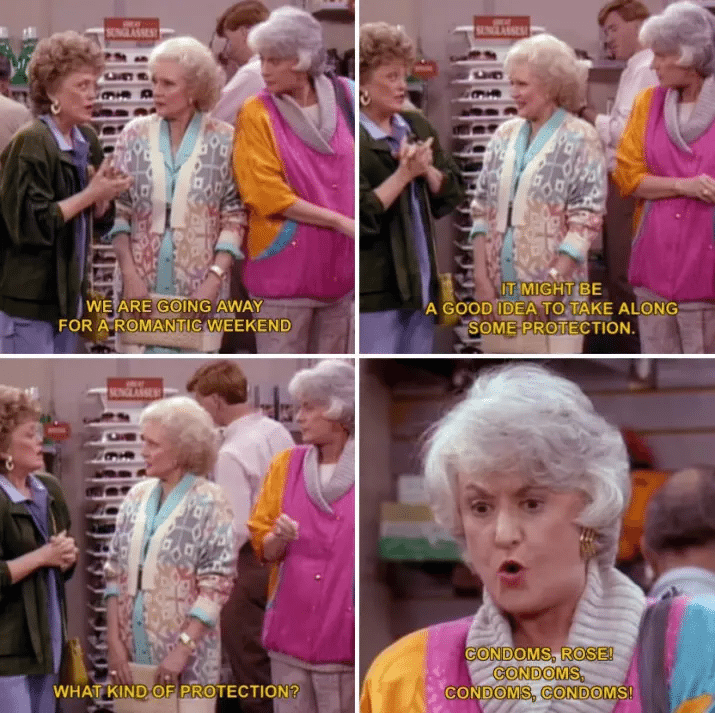 Maybe more than any of these, The Golden Girls is special to me because of the personal connection I feel to the show and the characters. These leading ladies remind me of my Noonie. The fashion, the matching shoe and handbag combinations, the rattan furniture, the lanai. All of these are essential Tillie Perelli. Every time I hear the theme song, thanking me (ME!) for being a friend, I think of my beautiful, wonderful, Noonie.

Anyone who knows me knows that wonderful women surround me. On my mom’s side of the family, in particular, I am part of a legacy of sisters. My Noonie had three sisters that I remember as the family matriarchs growing up. So close was their bond that three generations later, our kids still play together. My mom also has three sisters (and my Uncle Jet). Me: three sisters. My four girls. Four consecutive generations that have included four sisters. It’s like I am living The Golden Girls into perpetuity.

Needless to say, every time I see the show on my TV’s guide, I stop. I would recognize the introductory notes of the theme song anywhere. If you throw a party and invite everyone you know, rest assured, the biggest gift would be from moi. If you haven’t had the joy of familiarizing yourself with these lovely ladies, I encourage you to give it a try. You might just find yourself thanking them for being a friend, too. 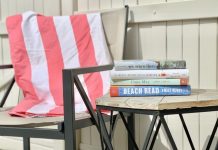 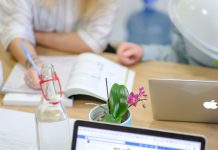 kailynmcmahon - August 5, 2020 0
If you live in or around Detroit, you’re no stranger to its distinguished culture and cuisine. Guy Fieri, the host of the Food Network's...

5 Fun Water Experiences to Keep You Cool in Detroit

ABOUT US
Detroit Mom is a locally-focused parenting resource for moms and families. Passionate about parenting and our community, Detroit Mom strives to connect area moms to relevant resources, local businesses, can’t-miss happenings, and most of all — each other!
FOLLOW US
Detroit Mom © - 2020
Sister Site at City Mom Collective
Change Location
To find awesome listings near you!